One of My Favorite Baseball Stats: RE24

One of my favorite baseball stats is one developed by sabermetrician Tom Tango and well explained by Patrick Jeter of Redleg Nation. It’s RE24, where “RE” stands for “Run Expectancy” and RE24 for “Run expectancy based on the 24 base-out states.”

In brief, it indicates how many runs, on average, a team can expect to score in an inning depending on the number of outs and which bases are occupied. For example, if a batter’s at the plate with the bases loaded and no outs, from that point to the inning’s end his team can expect to score more runs than if the same batter came to the plate with none on and the bases empty.

The key to determining about how many runs a team could expect to score is Tango’s RE24 matrix. Here’s a copy of the one in Jeter’s article: 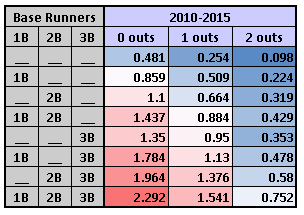 The table contains eight rows and three columns. Each row contains one of the eight possible Bases Occupied states from none on (- – -) to bases loaded (1B 2B 3B). Each column contains an out situation: 0 outs, 1 out, or 2 outs. Combined, there are 24 Base/Out states.

The first Base/Out state is none on and no outs. When a batter came to the plate in that situation in the years 2010-2015, on average 0.481 runs scored from that point until inning’s end. Now, of course, it is impossible to score half a run. Think of it as meaning this: over 100 innings, 48 runs scored (again, on average) in that situation.

Say the first batter strikes out. When the second batter comes to the plate, the Run Expectancy is no longer 0.481 because though the bases are still empty, there is one out, so the run expectancy changed by -0.127 (0.481 – 0.254). Notice that in this case the result of the first plate appearance reduced the team’s Run Expectancy.

That change in Run Expectancy, -0.127, is part of its run value. It is how much the strikeout reduced the team’s chances of scoring. Further, that negative run value is added to the first batter’s run value total, his RE24 stat, decreasing it.

Let’s look at one more situation. The third batter comes to the plate in the one out, man on first situation. That Run Expectancy is 0.509. He doubles, scoring the runner who was on first base. The Run Expectancy changes to 0.664 due to there now being a runner on second base with one out, so the run value of that double is 0.664 – 0.509 or 0.155 plus the run that scored, giving 1.155. That positive run value is added to the third batter’s RE24. So RE24 in this case is the change in the Run Expectation between two consecutive plate appearances plus any runs that scored, all in the same inning.

So what does a player’s RE24 for a number of games tell us? It reveals how many runs he helped to create by increasing the expectation that runs will score plus by any runs that actually result. An RE24 that is positive is above average, which is zero. An RE24 that is negative is below average.

Patrick Jeter. RE24: A Primer

Tagged as: Baseball Stats, RE24