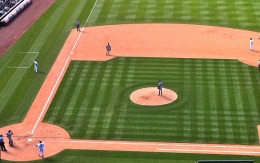 Review of “Beyond Batting Average”

If you’re a baseball fan interested in the statistical side of the game, Lee Panas’ book, Beyond Batting Average, strives to simplify the complexity of the “sabermetric” world. (Sabermetrics is the statistical analysis of baseball data.) It’s particularly useful for those who’d like to better understand stat-filled baseball books, such as Baseball Between the Numbers and Baseball Prospectus 2011, and baseball websites, such as fangraphs.com.

Among the book’s 15 chapters I found most interesting was the first, “History of Baseball Statistics,” which details how baseball statistics evolved, offering information on the men whose interest in numbers brought new statistical meaning to the sport. Its first page contains a box score from a game played in 1845 that appeared in the New York Morning News. Besides the players’ names, the only other columns in the box score are “Hands out” and “Runs.”

Among the stats the book explains is “range factor” (RF), which is covered in depth in the chapter, “Individual Fielding.” It was first formulated in 1872 and then “reintroduced a century later by Bill James in 1977.” Panas defines RF as “the average number of successful plays that a fielder makes per nine innings.” It’s based on a formula (given in the chapter) in which putouts and assists are added and then divided by the number of innings played; last, that result is multiplied by nine. The RF stat is available on espn.com.

In his book, Panas also provides an example in which the RF formula is applied to a specific player. He uses Jeter’s 2007 data, but only gives Jeter’s RF score and his ranking among shortstops. Panas also discusses the stat’s limitations.

One factor that contributes to the WAR value is the difficulty of a player’s position. Panas reveal that according to the way WAR is calculated, first base is the easiest position to play and is assigned a value of -12.5 points; whereas, catching is the most difficult. It’s assigned 12.5 points. Surprisingly, left field and right field are assigned the same value, -7.5, which is 10 points below center field.

Panas didn’t provide any information on how those difficulty factors were generated, details I would have found of interest. For example, why is left field considered to be of the same difficulty to play as right field? What percent of balls hit to the outfield go to left field? Right field?

While stats such as WAR are useful for ranking players, their value is limited. As Panas noted in his final chapter,

relying solely on a single value to define a player is generally not a good idea. It is important to understand a player’s strengths and weaknesses, which contributed to his final win estimate. The more we know about a player, the more we understand his value to his particular team. For example, a great fielding, poor hitting shortstop might have more value to a team with an otherwise strong offense than to a team with a weak offense.

Overall, Beyond Batting Average’s survey of sabermetrics presents the field in a non-intimidating way. The quality of its explanations and the generous inclusion of meaningful examples separates the book from most of its competitors. For only seven dollars for the digital edition ($14 for the print edition), it’s well worth the cost.