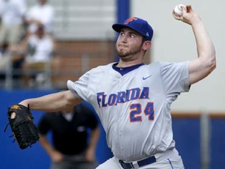 In the ninth round of the 2011 MLB draft, the Mets selected Alex Panteliodis, a pitcher from the University of Florida. He was the second lefthanded pitcher the Mets drafted, one of seven.

After being the Friday night starter for his first two seasons, he was demoted this season to being the midweek starter.

Hip surgery last July contributed to his demotion to the #4 spot in the rotation. He didn’t resume pitching until January 2011.

This season, on the Florida staff he had the seventh-highest ERA (3.76), starting 10 games and relieving in six. In 52.2 innings, he walked only nine batters while striking out 44, so he seems to have good control.

More information about him is available here.